Permission to run denied. A rest day then. Enjoy Christmas!

Something a bit different today. Grantham Running Club, like other clubs up and down the lambs, put on a Christmas Eve run, where runners were encouraged to don their Santa suits and had out across the Vale of Belvoir to a pub where a three course meal awaited.

A three mile jog to the house from where we were to depart – mulled wine and mince pies on offer. After the first of several group photos we headed off on a mostly off road run. Looking the part in my modified Santa suit, I tried my best to stay upright on the muddy tracks and trails – very nearly coming a cropper on one or two occasions but, by and large, keeping the Santa suit clean. Some of the views en route were stunning – lucky to have mostly blue skies, we could see for miles and miles. Indeed we were very lucky to just have a stiff headwind to contend with after the battering storms of the previous 24 hours.

Ten miles later and we were at the pub. A swift change and food and drink was soon being enjoyed. A very pleasant morning’s run! 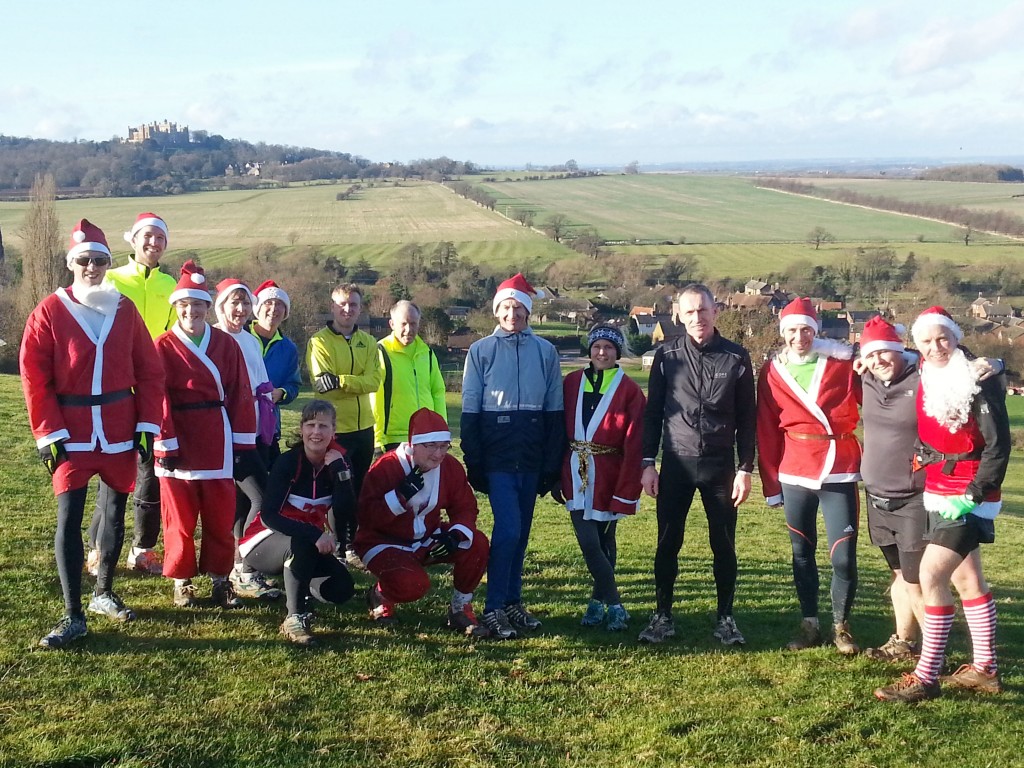 WIth predictions of chaos caused by strong winds and rain, we returned a little earlier than planned back home, and I wasted no time in getting my recovery run in before the wind became too strong to be able to run without fear of a bashing from a tree branch or worse.

The top of the right foot is painful when wearing the Nike Frees of the past two days. Thankfully there was no discomfort when the Lunarglides were on and I can be more or less assured that it is merely some tendon discomfort where the tongue of the trainers has been rubbing rather than anything more sinister.

On the standard recovery run of Queen Elizabeth Park through to Dysart Park and back, the outward leg was run mostly into the strong headwind, which saw me come to a near standstill at times. On the return leg I was blown almost more quickly than was comfortable for a recovery run. Pleasingly although the legs were a little tired, there was little sign of soreness or tightness from yesterday’s 23 mile run nor the accumulation of 82.5 miles across the past week.

Still in the Fens of Lincolnshire, I was out fairly early for a planned long run. In various incarnations, this run has been run on the last Sunday before Christmas for around the last seven years. A six mile dead straight road heading to Coningsby before finding another six mile long dead straight road to Gypsey Bridge. Interspersed with other straight roads and you have yourself a 23.5 mile long run.

The other USP of this run is that the entire run takes place at or around sea level with barely a noticeable change in elevation to be found – this despite passing through two hamlets that proclaim to sit on top of hills.

From the off and aside from some initial alarmingly green strings of snot barely ejected from the nostrils, it was apparent that body and legs were feeling noticeably more healthy than in previous days. There was very little of the run when I had a direct tailwind but much of the first half had a slightly favourable cross wind, so I deliberately eased back on the pace.

Coningsby is over halfway and after a welcome pit stop, I picked up the effort a touch on the way back, keeping the pace consistent or slightly faster despite the wind increasingly blowing more directly into the face. The flat straight nature of the run began to take its toll with several tendons and muscles in the legs aching from the repetitive strain.

At 20 miles there was a tough mile into a direct headwind before thankfully the final turn saw me back to having a crosswind, which allowed me to log the fastest mile of the run and indeed the week in the final mile.

Some considerable coughing later once stopped and it was time to drive back, having run over 82 miles for the week. Quietly and with not a lot of pace, I’d logged my biggest mileage week ever. Week one successfully accomplished.

With both my running clubs holding their Christmas parties on the Friday night I was probably one of the few to be in any fit state to head out for a run on the Saturday morning. The reason I wasn’t at either party was I’d rocked the night away at the gloriously over the top Witham & Blues American diner near Boston. An appropriately portioned three course meal washed down with some un-American, but pleasingly pleasant, cider (some equals a little too much, but thankfully not enough to cause any real damage).

The morning run was a drive to the bizarrely named Anton’s Gowt, where I ran up and down the River Witham footpath, reclaimed from a former train line to make a flat straight path from Langrick to Boston.

First I headed right to Langrick, slow, a little stiff, and slowed by a stiff crosswind. The wind here in the Fens is nearly always a factor in the run and the quicker bits were generally when I found a little shelter from the relentless battering of breeze.

Once at Langrick it was a U-turn and a four mile or so run to Boston. Once there it was an about turn back to Anton’s Gowt via a loop of the Witham Country Park, a title far grander than the reality of what is a bit of flat land and a path. At Anton’s Gowt it was a bit more of an out-and-back to bring the mileage up to a nice round ten. No real pace in the run but more miles in the bank.